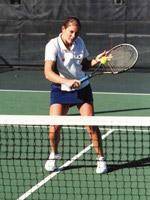 CLEMSON, S.C. – The Clemson women’s tennis team will play host to ACC-rival Georgia Tech on Thursday at the Hoke Sloan Tennis Center. First serve is slated for 2:30 PM. The 25th-ranked Tigers are in search of their second-consecutive upset as they take on the #21 Yellow Jackets. In their last match, the Tigers defeated 22nd-ranked Virginia by a score of 5-2 in Charlottesville. Entering Thursday’s match, Clemson is 13-3 overall and 4-0 in the ACC, and Georgia Tech’s record stands at 12-2 overall and 4-0 in league play.

Clemson has won eight of its nine last matches, with victories over conference opponents Maryland and Virginia last weekend. The Tigers’ only loss since Feb. 23 was to fifth-ranked Florida. In fact, Clemson’s only losses this season have been to top-30 ranked teams. The Tigers fell to then-#27 South Alabama 4-3, and dropped a 6-1 decision to sixth-ranked Georgia. Clemson has not lost a conference match yet this season, defeating NC State, Wake Forest, Maryland and Virginia.

Georgia Tech is riding a nine-match win-streak, including victories over three ranked teams during that span. The Yellow Jackets have lost only twice this season. Georgia Tech lost a 4-3 decision to then-27th-ranked South Alabama, and dropped a 6-1 match at Vanderbilt. The Yellow Jackets have also won four conference matches, defeating NC State, Wake Forest, Virginia and Maryland.

Clemson and Georgia Tech have played eight common opponents during the 2003 season. The Tigers hold an 8-1 record against those teams, while the Yellow Jackets are 7-1. Clemson played South Alabama twice, defeating the Bulls in the second meeting, while Georgia Tech faced South Alabama only once. Both teams have defeated Middle Tennessee State, Furman, South Carolina in non-conference play, and have faced the same ACC opponents.