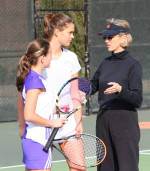 CLEMSON, SC – The Clemson women’s tennis team will play host to Auburn University Montgomery this coming weekend, from Oct. 20-22, at the Hoke Sloan Tennis Center on campus. Friday’s action will begin at 9:00 am with doubles competition, followed by singles. The schedule will be the same on Saturday, with the singles competition concluding at 10:00 am on Sunday morning.

The Tigers return five letterwinners from last season’s 15th-ranked squad, including junior Carol Salge and sophomore Federica van Adrichem, who are both ranked in the Fila/ITA Preseason singles poll. Maria Brito returns for her senior year at Clemson, while Kathi Gerber and Alexandra Luc are entering their second seasons with Head Coach Nancy Harris’ program.

Harris has also welcomed four rookies to the team this year, including Makarska, Croatia native Ani Majacika, who reached the quarterfinals of the Wilson/ITA Southeast Regional singles bracket last weekend. Selma Babic, Samantha Eppelsheimer and Ina Hadziselimovic will all be competing for the first time at the Hoke Sloan Tennis Center this weekend.

The Auburn University Montgomery Lady Senators are one of the elite programs in the NAIA. They are winners of six NAIA national championships and are two-time defending champions. Five different Lady Senators have also claimed NAIA individual titles.

Before being named the head coach at Clemson, Harris served as the head women’s tennis coach at AUM from 1989-1997 and also coached the school’s men’s team from 1994-1997. Harris led the women to a 135-34 record and the 1992 NAIA national championship, while the men’s team captured two NAIA national titles during her tenure.