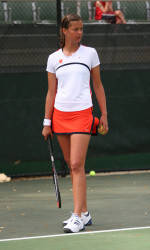 CLEMSON, SC – The fifth-ranked Tiger women’s tennis team will wrap up its 2007 regular season this weekend with matches at Virginia and Virginia Tech. Clemson (17-3, 8-1 ACC) will face the Cavaliers (10-8, 4-5 ACC) at 11:00 am on Saturday at the Snyder Tennis Center in Charlottesville, VA. The Tigers will then meet the Hokies (12-10, 2-7 ACC) in Blacksburg on Sunday morning at the Burows-Burleson Tennis Center. The match, which will be broadcast over the Internet at www.ACCSelect.com, is slated for a 10:30 am start time.

Clemson’s Ani Mijacika will look to complete a perfect ACC season as the rookie from Makarska, Croatia boasts an unblemished 9-0 slate against conference opponents this year. She is currently riding a 12-match winning streak that has bettered her overall record to 22-5 and her spring ledger to 17-2.

The Tigers have dominated the series over Virginia, winning 26 of 30 matches between the two conference foes. Clemson defeated the Cavaliers, 5-2, last year at home and posted a 6-1 victory in the most recent meeting in Charlottesville during the 2005 season. Overall, the Tigers lead by a 9-2 margin in matches played on Virginia’s home court.

Clemson also holds a 7-3 advantage against Virginia Tech in a series that dates back to 1985. The Tigers posted a 6-1 win over the Hokies on their home court in 2005, Virginia Tech’s first season competing in the ACC. Clemson also won a 6-1 decision last year at the Hoke Sloan Tennis Center.