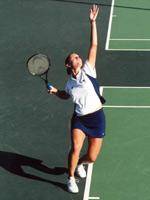 CLEMSON, SC – The Clemson women’s tennis team is ranked 17th according to the poll released by the Intercollegiate Tennis Association on Apr. 9. The Tigers improve from a ranking of 23rd in last week’s poll after upsetting #20 Georgia Tech and defeating #48 Florida State last weekend. Clemson is currently 16-3 overall and 6-0 in the ACC, which is the team’s best start in league play since the 1983 season, in which the team went undefeated in the conference.

This is the second time this season that Clemson has been ranked in the top-20 in the national rankings, as the Tigers were ranked 19th for two consecutive weeks earlier this season (Mar. 5 and Mar. 12). The 17th-place ranking is the highest since the 1996 season, when the Tigers were 14th in the Apr. 2, 1996 poll. This season, Clemson is 4-2 against top-25 ranked teams and boasts a 7-3 record over all ranked teams. The Tigers have defeated four higher-ranked opponents this season, upsetting then 14th-ranked South Alabama, then #18th-ranked South Carolina, then 20th-ranked Georgia Tech and then 22nd-ranked Virginia. Clemson has also posted victories over #48 Florida State, #51 Wake Forest and #74 Furman. Two of the team’s three losses have been to top-10 ranked teams (#5 Florida and #6 Georgia).

Two Clemson singles players and two doubles teams are also ranked in the latest ITA poll. Julie Coin is currently ranked 19th in singles. Coin has a 17-2 record in dual singles matches and is 6-0 in ACC singles play at flight one, and is currently riding an 11-match winning streak. Alix Lacelarie entered the singles rankings (#106) this week, after upsetting two ranked opponents last weekend. Lacelarie is 13-4 overall in singles and 5-1 in conference singles matches. The Tigers’ doubles duo of Coin and Laurence Jayet is ranked 27th overall, and has posted a 13-2 dual doubles match record (5-0 in the ACC). Lacelarie and Daniela Alvarez are currently #48 in the doubles rankings with a 13-1 overall record and a 5-1 ACC record. Alvarez and Lacelarie are undefeated (13-0) in matches at flight two doubles.