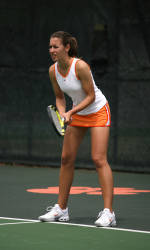 The Tigers have won their last four matches, including three against conference foes, and currently sit in second place in the ACC standings. Junior Ani Mijacika leads the squad and the nation with the #1 ranking. She boasts a 24-5 overall record with a 12-2 mark during the dual season.

Saturday will be the 40th meeting in history between Clemson and NC State. The Tigers swept the Wolfpack last season at the Hoke Sloan Tennis Center for their seventh straight and 35th overall win in the series. NC State’s last win over Clemson was in Raleigh during the 2001 season.

The Tigers have also won seven consecutive matches against Wake Forest to take a 23-17 lead in a series that dates back to 1978. The Demon Deacons won a pair of matches over Clemson in 2002 for their last wins in the series. Last year, the Tigers downed Wake Forest by a 6-1 margin at home.