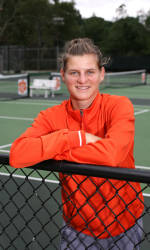 CLEMSON, SC – The Clemson women’s tennis team opened the 2009 spring season at #11 in the Intercollegiate Tennis Association poll, released on Tuesday. The Tigers return six players from a 2007 team that finished at 17-10 and with the 13th overall ranking. A pair of highly touted rookies joined the program in the fall and are both ranked in the singles poll, joining three veteran players.

Ani Mijacika is ranked fourth to start the dual season. The pair also claimed the top two spots in the Southeast Region.

Mijacika boasts a 67-18 career record that includes a 12-3 ledger during the 2008 fall slate. The native of Makarska, Croatia advanced to the finals of the ITA Intercollegiate Indoor Championships for the second straight year while winning her first eight matches of the season.

Senior Federica van Adrichem was listed at #102 in Tuesday’s poll. She went 6-6 during the fall and owns a 58-42 career record.

Freshman Keri Wong, who hails from Jackson, MS, debuted at #111. She compiled a 7-3 record in her first fall season and reached the quarterfinals of the southeast regional in October.

Alexandra Luc, a senior from Paris, France, also earned her first national singles ranking on Tuesday. She was listed at #117 after a fall season in which she went 6-6.

Mijacika and Van Adrichem teamed up for six wins in fall doubles play and were ranked 13th in the poll. The Tiger tandem of Wong and Ina Hadziselimovic was also ranked with the #35 listing. The pair boasted a 6-1 record during the fall and advanced to the quarterfinals of the southeast regional.

The Tigers will kick off their spring season against the College of Charleston on Jan. 23.