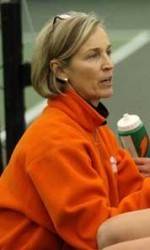 CLEMSON, SC – The 15th-ranked Clemson women’s tennis team, fresh off an upset of fourth-ranked Georgia, will welcome the Charlotte 49ers to the Clemson Indoor Tennis Center on Tuesday at 2:30 pm. The Tigers are trying to move to 8-0 on the season for only the fourth time in school history, while Charlotte checks in at 0-3.

Live scoring will be available at ClemsonTigers.com.

This will be Clemson’s final tune-up before heading to Madison, WI for the ITA National Team Indoor Championships, in which the Tigers have already reached the third round. Clemson plays #8 Southern California at 3:30 pm on Friday.

The Tigers defeated #4 Georgia in Athens on Saturday, their first win at a top-five opponent since 2006 and only the fourth road top-five win in school history. Laurianne Henry clinched the match in a dramatic third set at flight five after the Tigers had fallen behind, 3-1, in the match. Ina Hadziselimovic won at flight three, Estefania Balda won at flight six to help Clemson clinch the win.