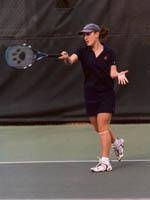 CLEMSON, SC – The Clemson women’s tennis team was named an ITA All-Academic Team for the 2003 season as announced by the Intercollegiate Tennis Association on July 16. The Tigers earned the honor after posting a cumulative team grade point average of 3.20 for the 2002-03 academic year. Four members of the 2003 Tigers garnered ITA Scholar-Athlete honors after recording cumulative grade point averages of 3.5 or above for the year.

Clemson’s Ashlea Bowen, Anna Dolinska, Richele LeSaldo and Ana Stiglic were named 2003 ITA Scholar-Athletes. Bowen posted a 3.67 grade point average in speech and communication studies, while Dolinska recorded a 3.72 GPA in financial management. LeSaldo, a parks, recreation and tourism management major, finished the year with a 3.60 GPA, while Stiglic posted a 3.67 grade point average in psychology to earn the honor for the second consecutive year.

The 2003 Tigers finished the season ranked 19th in the ITA post season tennis poll with a 19-6 overall record and a 7-1 ACC mark. The top-20 final ranking was the first for a Clemson team since the 1996 season when the Tigers also finished 19th in the national rankings. At the 2003 NCAA Women’s Tennis Championships, Clemson defeated Baylor 4-1 in the first round before falling to 11th-ranked North Carolina 4-1 in the second round.