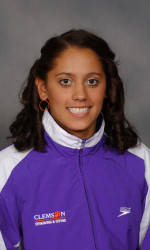 Chapel Hill, NC – With one session to go, the Clemson Women’s Swimming and Diving team has put themselves in a position to be in the top five in the overall competition. The Lady Tigers placed three swimmers in the finals, and three more in the consolation finals, as they will look to light up Koury Natatorium tonight. Clemson is currently sitting in the sixth position, just five points behind fifth place Miami.

The Saturday morning session started off well for the Lady Tigers as Michelle Parkhurst (2:00.22) swam a season best time in the 200 backstroke to qualify sixth for tonight’s championship final. Ashley Clay (2:04.19) and Casey Kroll (2:05.22) also had season best times to qualify 15th and 18th, respectively. In the second event of the morning, Rachel Regone raced to a sixth place seed for tonight’s finals in the 100 freestyle. Regone recorded an NCAA Provisional Qualifying time of 50.75 in the event. Katrina Obas continued her torrid run at this year’s championships as she qualified sixth in the 200 breaststroke (2:16.86) with the second fastest time in school history. This will be her third event final in as many days. Obas placed eighth in the 200 IM on Thursday and seventh in the 100 breaststroke on Friday. Fellow freshman Alexandra Barsanti (2:20.75) recorded the 14th best time of the morning in the 200 breaststroke. In the final event of the morning, senior Sarah Cefalu swam a career best time of 2:04.05 in the 200 butterfly to qualify 12th.

Clemson will participate in the timed final heats of the 1650 freestyle this afternoon starting at 4 p.m. The finals session will begin at 7 p.m. tonight, and can be watched live on ACC Select.