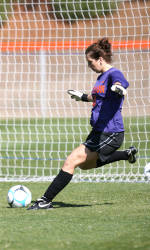 The Tigers opened the spring season on March 8 with a 2-1 victory over Auburn in Auburn, AL. Many returning players that played significant roles on the team during the fall season continued their successes in the game against Auburn.

In addition, three newcomers made significant strides and all three pleasantly surprised the coaching staff in terms of their contributions to the result. Sophomore Paula Pritzen started in goal for Clemson, sophomore midfielder Danielle Schmitt assisted on both Tiger goals and freshman and early enrollee Tara Cort made her college debut against Auburn.

“It was great to get the first game of the spring season under our belt,” said Head Coach Hershey Strosberg. “Playing against a program that went to the NCAA tournament last season was a solid test for our young team. We played a lot of different players and experimented with a few things we have been working on during training.”

“As a staff, we felt good about the score of the game, but even more so how we went about it,” Strosberg added.

Clemson will have two remaining dates on its spring schedule following this Saturday’s round-robin tournament. The Tigers will travel to Winston-Salem, NC on Saturday, April 12 for the ACC Spring Games. The team will then face Georgia in Athens on Friday, April 18 to close out the spring season.