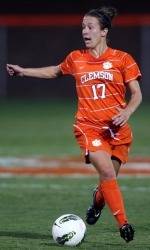 CLEMSON, SC – The Clemson women’s soccer team will honor its three seniors as it plays host to Francis Marion on Thursday, October 27 at Historic Riggs Field. The game between the Tigers and the Patriots will kick off at 7:00 PM and will be broadcast live on ClemsonTigers.com via TigerCast. There will be a Halloween costume contest during halftime, and all fans are invited to wear a Halloween costume to the game.

Thursday’s game will be the final game for Clemson’s three seniors, Ashlynne Bass, Rachel Hurd and Sarah Jacobs. Bass, a defender from Loganville, GA, has been a mainstay on the Tiger back line in 2011, playing 1471 minutes, more than any other player on the team. Hurd, a midfielder from Sammamish, WA, has four assists so far in 2011, which places her in a tie for second on the team in terms of season assists. Jacobs, a midfielder from Greer, SC, is a co-captain on the 2011 team and has played in 66 games, starting 53, in her four-year career as a Tiger.

The Tigers are 5-12 on the year, most recently falling to third-ranked Wake Forest by a score of 4-0. In the team’s last nine games, seven have been against opponents ranked 11th or higher in the national poll. Junior forward Lauren Arnold and Morgan Hert have shared the goalkeeping responsibilities in 2011, posting 41 saves in 1177 minutes and 19 saves in 389 minutes, respectively.

Francis Marion has a 4-11-1 record on the season. The Patriots most recent outing was a 3-2 loss to South Carolina State on the road on October 20. The Patriots are led in scoring by Yasmin Bunter with four goals and four assists for 12 points. Lauren Vetock has played all 1460 minutes in goal, recording 88 saves and giving up 32 goals on the year.

Clemson has a 3-0 record all-time against Francis Marion. Last season, the Tigers defeated the Patriots by a score of 4-1 in Florence, SC on October 24, 2010. Vanessa Laxgang scored three goals in the game, recording the 18th hat trick in program history, and the eighth by a freshman.