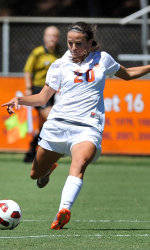 CLEMSON, SC – The Clemson women’s soccer team will play host to Coastal Carolina on Friday, September 17 at Historic Riggs Field. The 7:00 PM contest between the Tigers and the Chanticleers will be the final non-conference match for Clemson prior to opening the ACC season next week.

The Tigers are 5-2 on the season, most recently falling to #21 South Carolina (2-0) and High Point (4-3) in the Carolina’s Cup tournament in Columbia, SC last weekend. Maddy Elder leads Clemson in scoring, having recorded five goals and three assists for 13 points so far this season. The sophomore forward currently ranks in a tie for sixth place among all Atlantic Coast Conference players in goals (5), goals per game (0.71), points (13) and points per game (1.86).

Freshman forward Jackie Dutton ranks second on the team in scoring with two goals and one assist for five points. Three other freshmen, forward Hailey Karg, midfielder Vanessa Laxgang and forward Maggie Murphy, each have four points recorded on the season.

Freshman goalkeeper Lauren Arnold has recorded 32 saves in 611 minutes in goal for Clemson. The native of Hoover, AL currently leads the ACC in saves (32) and saves per game (4.57).

Coastal Carolina has a 3-4 record so far in 2010, most recently defeating Appalachian State by a score of 1-0 on the road in Boone, NC. The Chanticleers are led in scoring by senior forward Anna Tupy and freshman forward Hannah Brown. Both players have tallied two goals and one assist for five points. Sophomore Jessica Barton has posted 25 saves in 453 minutes in the net for Coastal Carolina.

The Tigers have a 2-0 record in the series against the Chanticleers. Both meetings were played at Historic Riggs Field, with the most recent being a 5-0 Clemson victory on September 5, 2007.