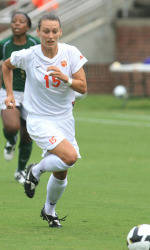 CLEMSON, SC – The Clemson women’s soccer team will open the 2008 Atlantic Coast Conference season as it plays host to third-ranked North Carolina on Thursday night at Riggs Field. The contest between the Tigers and Tar Heels is scheduled to begin at 7:00 p.m.

Thursday’s game will be broadcast live and on-demand via ACC Select and can be viewed by clicking on the link below.

Clemson is 4-3 overall, most recently falling to Furman by a score of 2-1 in Greenville. Senior forward Julie Bolt leads the Tigers in scoring with six goals for 12 points on the year. Sophomore forward Judea Davis ranks second on the team with three goals for six points. Three Tigers (freshman Tara Cort and juniors Molly Franklin and Lindsey Jackson) have tallied five points apiece so far this season. Sophomore goalkeeper Paula Pritzen has 18 saves in 565 minutes in goal for Clemson.

North Carolina is 7-1-1 on the season, defeating Georgia (4-0) and Fordham (6-0) at the Duke adidas Soccer Classic last weekend. The Tar Heels are led in scoring by juniors Nikki Washington and Casey Nogueira with 15 (four goals, seven assists) and 14 (six goals, two assists) points, respectively. Anna Rodenbough and Ashlyn Harris have combined for 23 saves in goal for North Carolina.

This will be the 23rd meeting in the series between the Tigers and Tar Heels and North Carolina holds a 21-1 advantage. In 2007, Clemson dropped two 3-0 decisions to the Tar Heels, one during the ACC regular season in Chapel Hill and one in the quarterfinal round of the ACC Tournament in Lake Buena Vista, FL.