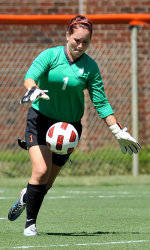 CLEMSON, SC – The Clemson women’s soccer team will open the 2010 Atlantic Coast Conference season at home on Thursday night against N.C. State. The game between the Tigers and the Wolfpack will begin at 7:00 PM at Historic Riggs Field. The game will be broadcast live on ClemsonTigers.com via TigerCast.

Clemson is 5-3 on the season, most recently falling to Coastal Carolina in a 1-0 heartbreaker on Friday, September 17 at Historic Riggs Field. Sophomore forward Maddy Elder leads the Tigers in scoring with five goals and three assists for 13 points.

Freshman forward Jackie Dutton ranks second on the team in scoring with two goals and one assist for five points. Three other freshmen, forwards Hailey Karg and Maggie Murphy and midfielder Vanessa Laxgang, have four points apiece to rank in a tie for third in scoring. Eight different players have scored goals for Clemson in the team’s first eight games.

Freshman goalkeeper Lauren Arnold has started all eight games in goal for the Tigers, playing over 701 minutes. Arnold has posted 36 saves and given up nine goals so far this season.

N.C. State has a 6-3 overall record, most recently defeating Old Dominion on the road by a score of 1-0. Junior midfielder Kristina Argiroff and freshman forward Jennie Krauser have four goals and four assists each to tie for the team lead in scoring with 12 points apiece. Junior goalkeeper Kim Kern has recorded 27 saves and given up five goals in 726 minutes in the net for the Wolfpack.

Clemson has a 13-3-4 all-time advantage in the series against N.C. State. Last season, the Wolfpack defeated the Tigers by a score of 2-1 in Raleigh, NC. The most recent meeting between the two teams at Historic Riggs Field was a 3-0 Clemson victory on October 9, 2008.

The Tigers will travel to Winston-Salem, NC to face Wake Forest on Sunday, September 26 in a 1:00 PM contest at Spry Stadium. The Demon Deacons will face Duke on Thursday in Durham, NC before playing host to the Tigers on Sunday.

Wake Forest is 6-3 on the season, most recently dropping a 1-0 decision to #20 South Carolina in Winston-Salem. Freshman forwards Rachel Nuzzolese and Katie Stengel lead the Demon Deacons in scoring with 16 (six goals, four assists) and 15 (seven goals, one assist) points, respectively. Freshman keeper Aubrey Bledsoe has posted 19 saves and given up 10 goals in 813 minutes in goal for Wake Forest.

The Tigers have a 12-5-3 record all-time against Wake Forest, however the last three meetings between the two teams have been victories for the Demon Deacons. In 2009, then-ninth-ranked Wake Forest defeated Clemson by a score of 3-0 at Historic Riggs Field.