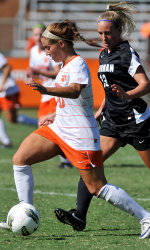 CLEMSON, SC – The Clemson women’s soccer team will play its first Atlantic Coast Conference game of the 2011 season on the road against Miami on Thursday, September 15. The game between the Tigers and the Hurricanes is set to kick off at 7:00 PM at Cobb Stadium in Coral Gables, FL.

Clemson is 5-2 on the season, most recently falling to South Carolina (2-0) and Furman (3-2, 2OT) in the Carolina’s Cup tournament in Clemson, SC last weekend. The Tigers are led in scoring by junior forward Maddy Elder. Elder has six goals and two assists for 14 points, and ranks in the top five in the ACC in goals, goals per game, points and points per game.

Freshman forward Lauren Arnold has tallied 14 saves and has given up six goals in 604 minutes in the net for the Tigers.

The Hurricanes have a 5-1 record so far in 2011 after defeating Duquesne (3-0) and Florida Gulf Coast (2-1, 2OT) last weekend in Coral Gables and Fort Myers, FL, respectively. Junior forward Kate Howarth leads Miami in scoring with five goals and three assists for 13 points on the season. Senior Vikki Alonzo has posted 23 saves and given up three goals in 488 minutes in goal for the Hurricanes.

Miami has a 4-2-1 advantage in the series against Clemson, which dates back to the 2004 season. In games played in Coral Gables, FL, the Tigers have a 1-1-1 record. Last season, the Hurricanes defeated the Tigers by a score of 3-0 at Historic Riggs Field.