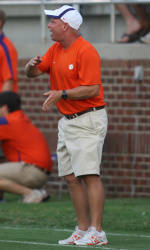 CLEMSON, SC – The Clemson women’s soccer team will open the 2011 season on Friday night as it plays host to South Carolina State. The game between the Tigers and the Bulldogs is scheduled to begin at 7:00 PM at Historic Riggs Field and will be broadcast live on ClemsonTigers.com via TigerCast.

The Tigers return 14 letterwinners, including eight starters, and welcome 10 newcomers for the 2011 season. The team’s two leading scorers, forward Maddy Elder and midfielder Vanessa Laxgang, are back for their junior and sophomore seasons, respectively. Other key players returning to the lineup for 2011 are junior defender Heather Marik and seniors Ashlynne Bass, Rachel Hurd and Sarah Jacobs.

Clemson is under the leadership of new head coach Eddie Radwanski, who amassed a 139-65-13 record in 10 seasons at UNC Greensboro. Radwanski led the Spartans to five NCAA tournament appearances during his tenure, and his team won the Southern Conference regular season title and/or tournament championship eight of his 10 seasons with the program.

Friday’s game will be the first meeting between Clemson and South Carolina State in women’s soccer. The Tigers have a 16-1 all-time record in season-opening games. The team’s only loss in a season opener was to North Carolina in 1994, the program’s inaugural year.

Admission is free for all home women’s soccer games.