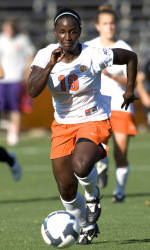 CLEMSON, SC – The Clemson women’s soccer team will hit the road this weekend for matches at UNC-Asheville and Alabama-Birmingham. The Tigers will face the Bulldogs on Friday, August 28 at 4:00 PM at Greenwood Field in Asheville, NC. The team will travel to Birmingham, AL to take on the Blazers on Sunday, August 30 at 2:00 PM at West Campus Field.

Friday’s game will be the season opener for UNC-Asheville. The Bulldogs return nine starters from a 2008 squad that finished with a 5-13-1 overall record. Clemson is 9-0 all-time against UNC-Asheville, most recently defeating the Bulldogs by a score of 8-0 at Historic Riggs Field in 2008.