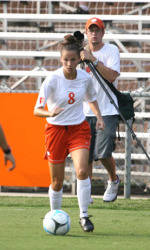 CLEMSON, SC – The Clemson women’s soccer team will face Furman on Friday night in Greenville, SC. The game between the Tigers and Paladins is scheduled to begin at 7:00 p.m. at Stone Soccer Stadium.

The Tigers are 4-2 on the season, most recently falling to third-ranked Southern California by a score of 6-2 at Riggs Field. Senior Julie Bolt has six goals for 12 points to lead Clemson in scoring. Sophomore Judea Davis is second on the team with three goals for six points. Junior Molly Franklin and sophomore Samantha Fortier have tallied three assists apiece and sophomore keeper Paula Pritzen has recorded 16 saves in goal for the Tigers.

The Paladins are 4-2-1 so far in 2008, most recently defeating Presbyterian 1-0 at the Academy Sports Shootout in Spartanburg, SC. Furman is led in scoring by freshman forward Martha Hall, with three goals for six points on the season. Junior goalkeeper Briana da Mota has recorded 12 saves in goal for the Paladins.

The Tigers and Paladins have already played four common opponents on the young 2008 season. Clemson defeated Presbyterian 3-0, while Furman defeated the Blue Hose 1-0. The Tigers won an 8-0 decision over UNC Asheville, while the Paladins downed the Bulldogs 2-1. Both teams won their matches over Francis Marion (Clemson 3-0, Furman 2-1) and fell to South Carolina (Clemson 1-0, Furman 2-1) at the Carolina’s Cup the weekend of September 5-7.

This will be the 13th meeting in the series between Clemson and Furman, with the Tigers holding an 11-0-1 all-time advantage heading into Friday’s contest. In 2007, Clemson defeated Furman by a score of 2-1 at the Carolina’s Cup in Charlotte, NC.

Tickets for Friday’s game at Stone Stadium can be purchased online through the Furman Athletic Ticket Office. Tickets are $3 for adults and $1 for youth. Click on the link below for purchase information.