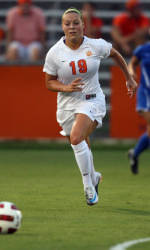 CLEMSON, SC – The Clemson women’s soccer team will travel to Greenville on Friday, September 3 to take on Furman. The game between the Tigers and the Paladins is scheduled to kick off at 7:00 PM at Eugene E. Stone III Stadium.

The Tigers are 3-0 on the season, most recently defeating Belmont in Nashville, TN by a score of 2-1 in overtime. Clemson is led in scoring by sophomore forward Maddy Elder, who has recorded four goals and two assists for 10 points in just three games. The native of Roanoke, VA currently leads all players in the Atlantic Coast Conference in goals per game (1.33) and points per game (3.33).

Freshman forward Jackie Dutton (Bridgeport, OH) has two goals and one assist to rank second on the team in scoring. Freshman goalkeeper Lauren Arnold (Hoover, AL) posted 15 saves in 262 minutes in the net in the first three games of her Clemson career.

Furman is 2-1 on the season, most recently defeating Alabama by a score of 3-0 in Tuscaloosa. The Paladins’ lone loss came on August 20 in double overtime to Jacksonville, a team which the Tigers defeated 3-1 on August 22.

Furman is led in scoring by junior midfielder Rachel Shelnutt with two goals and three assists for 10 points. Junior goalkeeper Jessica Smith has recorded 14 saves in 282 minutes in goal for the Paladins.

Clemson has an 11-2-1 advantage in the series against Furman, however the Paladins have won the last two contests between the two teams. Last season, Furman won a 2-1 decision in overtime at Historic Riggs Field.

On Sunday, September 5, the Tigers will return to Historic Riggs Field to play host to North Florida. The game between Clemson and the Ospreys is set for 1:00 PM.

North Florida is 0-3 on the season, most recently falling to San Francisco and Saint Mary’s (CA) during a West Coast trip. The Ospreys will play Presbyterian College on Friday night in Clinton, SC before facing the Tigers on Sunday.

Sophomore forward Michelle Larrinaga has two goals on the season and junior keeper Brittany Hahn has posted 11 saves to lead the Ospreys statistically. Sunday’s game will be the first ever meeting between Clemson and North Florida in women’s soccer.