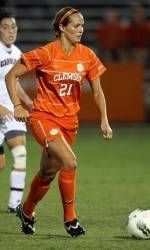 CLEMSON, SC – The Clemson women’s soccer team will play its first of four consecutive home games against teams ranked 13th or better in the nation on Thursday, September 22 when it plays host to #10 Florida State. The game between the Tigers and Seminoles is set to kick off at 7:00 PM at Historic Riggs Field. Thursday’s game will be broadcast live on ClemsonTigers.com via TigerCast. During halftime, Clemson United t-shirts and scarves will be thrown out to the crowd.

The Tigers are 5-3 overall and 0-1 in Atlantic Coast Conference play after falling to Miami by a score of 3-2 in double overtime in Coral Gables, FL last Thursday. Junior forward Maddy Elder leads Clemson in scoring with six goals and four assists for 16 points on the season. Elder’s scoring statistics rank her in seventh place or better among all league players in points, points per game, goals and goals per game.

Freshman forward Lauren Arnold has tallied 15 saves in 705 minutes in goal for the Tigers so far in 2011.

Florida State has a 7-3 overall record and a 0-2 mark in ACC play. The Seminoles opened league play last week with road losses at #13 Wake Forest (2-0) and #4 Duke (2-1). Redshirt junior forward Tiffany McCarty has seven goals and one assist for 15 points to lead Florida State in scoring. Redshirt sophomore Kelsey Wys has posted 27 saves in 720 minutes in goal for the Seminoles.

The Tigers have a 7-12-2 record all-time against Florida State. The Seminoles won the most recent meeting between the two teams by a score of 3-0 on October 7, 2010 in Tallahassee, FL.