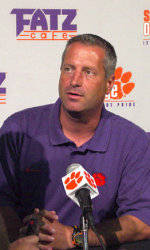 Clemson is ranked 25th in the final Soccer America poll of the 2006 season. The Lady Tigers are also ranked 21st in this week’s National Soccer Coaches Association of America (NSCAA) poll. Clemson is also ranked 23rd by soccerbuzz.com.

The Clemson women’s soccer team received a NCAA Tournament Bid on Monday and will play host to the first two rounds at Historic Riggs Field.

Oklahoma State is a fourth-seeded team in this regional and a top-16 seeded team for the entire tournament. Oklahoma State has a 16-3-2 record overall, UNC Greensboro is 13-7-2 overall and Vanderbilt has a 10-4-6 record this season.