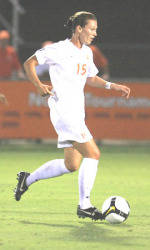 CLEMSON, SC – The Clemson women’s soccer team dropped a 6-2 decision to third-ranked Southern California at Riggs Field on Sunday afternoon. The Tigers fall to 4-2 with the loss, while the 2007 National Champion Trojans improve to 6-1 with the win.

Southern Cal took a 3-0 lead into halftime behind goals from Carly Butcher, 2008 Olympic goal medalist Amy Rodriguez and Alyssa Davila. Ashley Freyer and Davila scored the Trojans’ fourth and fifth goals in the first 13 minutes of the second half.

Senior Molly Johnson put the Tigers on the board in the 69th minute of play following a Southern California foul. Junior midfielder Katie Vogel served the ball to Johnson on the set piece and the defender headed it into the net past the Trojan keeper from 12 yards out. It was the first goal of the year for Johnson and the first assist for Vogel.

USC’s Ashli Sandoval scored at the 71:56 mark for the Trojans’ sixth goal before Clemson ended the scoring with its second goal of the day with less than three minutes left in the game. Freshman Samantha Fortier. The sophomore forward crossed it to Julie Bolt, who put an eight-yard shot into the bottom of the net. It was the sixth goal of the season for the senior forward.

Clemson took 11 shots in the contest, while Southern Cal took 19. Corner kicks were four to three in favor of the Trojans, who were called for 17 fouls, compared to the Tigers’ seven. Sophomore Paula Pritzen recorded eight saves in goal for Clemson, while two keepers combined for three saves for USC.

“There is definitely a reason why they are the defending national champions,” noted head coach Hershey Strosberg after the game. “They have good team depth, play very organized and have some very special players that were able to break open the game.”

“Playing a team at that high level of competition certainly magnifies your mistakes,” he added. “At the same time, I think we showed character and we battled, and I was pleased with that, as well as the fact that we had the mental resolve to score two deliberate goals. This was a great learning experience for us today.”

The Tigers will be back in action against Furman on Friday, September 19 in Greenville, SC. The game is scheduled to begin at 7:00 p.m. at the Paladins’ Stone Stadium.