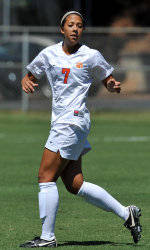 COLUMBIA, SC – The Clemson women’s soccer team fell to High Point on Sunday by a score of 4-3 at the Carolina’s Cup tournament in Columbia, SC. The loss drops the Tigers’ record to 5-2 on the season, while the Panthers improve to 2-5 with the win.

The Panthers put the games’ first goal on the board less than three minutes into the first half, when Kelli Joline scored at the 2:32 mark. The Tigers evened the score at 1-1 in the 13th minute on a goal by sophomore forward Maddy Elder. Elder rebounded her own shot and put it in the net for her fifth goal of the season.

Sophomore midfielder Kate Biggerstaff scored her first goal of the year, and of her career, at the 43:23 mark to give Clemson a 2-1 lead heading into halftime. Biggerstaff was assisted by freshman forwards Deana Sherry and Maggie Murphy on the goal.

High Point netted three goals in the second half. Katie Taber scored twice and Brooke Lisson scored once to give the Panthers the 4-2 lead. Freshman defender Katie Uyenishi scored Clemson’s third goal in the 85th minute. Uyenishi’s goal, her first of the season, was a header off of a corner kick by freshman midfielder Vanessa Laxgang.

For the game, Clemson took 12 shots and had 7 corner kicks, while High Point had 11 shots and one corner kick. Freshman keeper Lauren Arnold posted three saves for the Tigers, while Andrea Ritchie recorded four for the Panthers.

“We let a good opportunity get away from us today, but learned an important lesson relative to the level we expect to compete at every day,” said Head Coach Hershey Strosberg. “The credit goes to High Point; they took advantage of every chance they had.

“With one more week of non-conference play, we will look to solidify several things and prepare for Friday night’s game at home. So long as we learn and grow as a team, we will continue to improve and compete closer to what we know we are capable of.”

Clemson will return to action on Friday, September 17 as it plays host to Coastal Carolina. The game between the Tigers and the Chanticleers is scheduled to begin at 7:00 PM at Historic Riggs Field.