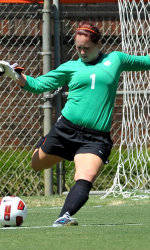 COLUMBIA, SC – The Clemson women’s soccer team fell to 21st-ranked South Carolina in its first game of the Carolina’s Cup tournament in Columbia, SC on Friday night by a score of 2-0. The loss was the Tigers’ first of the season, dropping the team’s record to 5-1. The Gamecocks improve to 4-1-1 with the win.

After a scoreless first half, South Carolina’s Kayla Grimsley put a goal on the board in the 52nd minute. Grimsley beat the Tiger defense and put the ball in the net on the ground to the left of Tiger freshman goalkeeper Lauren Arnold. The Gamecocks scored again at the 65:59 mark on a goal by Danielle Au. Au came up with the rebound on a shot by Elizabeth Sinclair and launched it into the net from the left side about 10 yards out.

South Carolina controlled the majority of the game offensively, taking 22 shots to Clemson’s five, and the Gamecocks had 11 corner kicks to the Tigers’ three. Arnold posted eight saves in goal for the Tigers, while Mollie Patton recorded two stops in the net for South Carolina.

“I’m proud of our team and our effort,” said Head Coach Hershey Strosberg. “We played a good opponent tonight which brought out pieces that we can improve. We will grow from this experience and be ready for the game on Sunday.”

The Tigers will remain in Columbia, as they will face High Point on Sunday, September 12 in the team’s second and final game of the Carolina’s Cup tournament. Clemson will take on the Panthers at 12:00 PM on Sunday at the Gamecocks’ Stone Stadium.