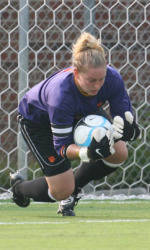 With three saves recorded against the Seminoles on Thursday night, senior All-American goalkeeper Ashley Phillips moved into first place in Clemson history for career saves. Phillips now has 307 saves for her four-year career, surpassing the previous record of 305 saves set by Katie Carson from 1998-2001.

Florida State scored with 49 seconds left in the first half to take a 1-0 lead. Mami Yamaguchi scored the Seminole goal on a give-and-go with Amanda DaCosta. DaCosta earned the assist on the play.

Clemson was called for a foul in the box in the 70th minute and Yamaguchi scored the Seminoles’ second goal on a penalty kick.

“Obviously, it was disappointing to give up a goal right at the end of the first half,” said Head Coach Todd Bramble. “Still, I was pleased with the way the game unfolded in the first half. We were executing our game plan well and had a few good scoring opportunities. Our finishing woes certainly continued tonight.”

“Florida State is a good team and gets a lot of credit. In the second half, they did a good job of keeping the ball away from us and not allowing us to get any momentum,” he added.

“I feel that our players are giving us everything they have,” Bramble noted. “Unfortunately, the seven overtime games have taken a toll on their legs. Not only that, but they have certainly taken an emotional toll as well.”

The Lady Tigers will play host to Duke on Saturday in their final regular season game. The contest between Clemson and the Blue Devils is scheduled to begin at 7:00 p.m. at Riggs Field. The Lady Tigers will honor five seniors, Ashley Phillips and Nuria Zufia, prior to the game.