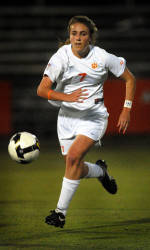 Senior midfielder Molly Franklin put the Tigers on the board in the 12th minute of the game. The play began with a long free kick from sophomore defender Tara Cort settled the pass from Bass and tapped it over to Franklin, who sent the ball into the goal to the lower right of the Alabama goalkeeper.

Less than three minutes into the second half, with a good defensive play Cort picked off a pass meant for an Alabama player. She dribbled down the field and tucked the ball into the goal to the keepers’ lower left for Clemson’s second goal of the day.

“Our back line did a great job of limiting Alabama’s chances,” said head coach Stefanie Schroeder played very consistently. She has been working hard and doing a great job of leading the back line all preseason.

“Today’s game was definitely a positive step for us to build on,” Strosberg continued. “We had a lot of people play well, and more importantly, we played well as a team.

“We played a complete game today, which is something we’ve really been focusing on. Still, we know we have a lot of work to do. It’s very early in the season and we will continue to be tested.”

Clemson will open the 2009 regular season on Saturday, August 22 when the team will play host to Wofford. The game is scheduled to begin at 6:00 PM at Riggs Field.