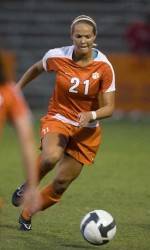 CLEMSON, SC – The Clemson women’s soccer team defeated Presbyterian College by a score of 3-0 on a rainy Sunday afternoon at Historic Riggs Field. The Tigers improve to 3-5 with the win, while the Blue Hose fall to 3-5 with the loss. Clemson freshman forward Maddy Elder netted two goals in the game, bringing her total to nine for the season and her career.

Elder scored the game’s first goal in the 33rd minute of play. Sophomore defender K.K. Duffy sent a long pass to Elder in the box and the freshman sent it into the net for her eighth goal of the season.

The second goal of the game was an own goal for Clemson that was misplayed by a PC defender and dribbled into the goal past Blue Hose keeper Sarah Beth Anderson in the 51st minute.

Clemson’s third goal was scored with just nine second left in the game. Senior forward Lily Boleyn passed the ball to Elder, who broke away from the PC defense and sent a sharp shot on the ground past Anderson.

“It is always good to get a win,” said Tiger Head Coach Hershey Strosberg. “We played well enough to win, but we were not as sharp as we want to be. Maddy Elder is finding a way to be dangerous, which helps our entire team to be more dangerous.

“Playing on Friday and Sunday in a weekend presents different challenges and our players have to be able to adjust to the demands of the game. We had a good performance against Georgia on Friday night and were able to get a win today, which was good. We have a big challenge ahead of us as we open ACC play this week.”

The Tigers will return to action on Thursday, September 24 when they open the Atlantic Coast Conference season at Virginia Tech. The Tigers will take on the Hokies at 7:00 PM in Blacksburg, VA.