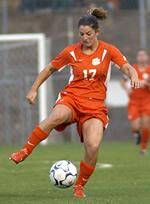 Clemson, SC – The Clemson women’s soccer team was ranked 13th in the nation in the latest national poll released by the National Soccer Coaches Association of America on Monday. The Lady Tigers were also ranked No. 17 by Soccer America.

For their play this weekend, freshman Courtney Foster was named the tournament’s Offensive MVP and junior Sarah Turner was named Defensive MVP. Paige Ledford and Allison Mitchell were also named to the All-Tournament Team.

Clemson returns to action this weekend when it travels to the west coast to face Cal-State Fullerton on Friday night and San Diego on Sunday afternoon.