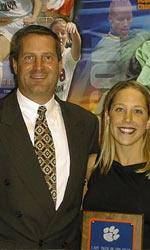 CLEMSON, SC – The Clemson women’s soccer team was honored with a banquet last weekend and Tricia Williams was named the team’s MVP. Williams started all 21 matches and had two goals and three assists for seven points.

Katie Carson was named the team’s defensive MVP. She set the ACC career record for shutouts and helped lead Clemson to its fifth straight NCAA Sweet 16 appearance in 2001. The senior goalkeeper was also named a third-team All-American by the NSCAA. The native of Chagrin Falls, OH is the sixth women’s soccer player in Clemson history to be named a first, second, or third team All-American and just the third to be selected by the NSCAA.

Carson holds the Clemson single season and career record for shutouts, saves, and goal’s allowed average. She started 89 out of a possible 90 games over her career and is tied for first in Clemson history in games started. Earlier this season on October 16 against Wake Forest, she set the ACC career record for shutouts. With 10 shutouts this season, she finished her career with 34 solo shutouts.

Lindsay Browne was named the team’s most valuable offensive player. Browne was the Lady Tigers’ leading scorer with nine goals and eight assists for 26 points. She also had three game winning goals.

Kati Reid was named the Coaches’ Award Winner this season.

The 2001 award winners are as follows: