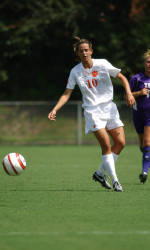 Davidson, NC – The Clemson women’s soccer team defeated Davidson on Tuesday night by a score of 1-0 at the Wildcats’ Alumni Stadium. The exhibition match, which was originally scheduled to begin at 6:00 p.m., was delayed for nearly an hour due to storms in the Davidson area.

Although Clemson controlled the ball for the majority of the match, the Lady Tigers and the Wildcats played scoreless soccer for the first 88 minutes of play. With two minutes left in regulation, red-shirt senior midfielder Courtney Foster crossed the ball in front of the Davidson goal and senior forward Nuria Zufia was there to boot the ball past the Wildcat goalkeeper to give Clemson a 1-0 lead and the victory.

Head Coach Todd Bramble had concerns about the way they began, but was pleased with the way his team finished the match.

“We had a very slow start to the match and I was not at all happy with our play in the first half,” said Bramble. “In the second half, the team came out with a sense of urgency and determination that impressed me. We played hard and were able to wear Davidson down so that they gave up a goal in the end.”

The Lady Tigers will play host to Georgia on Saturday, August 25 at 7:00 p.m. in an exhibition match at Riggs Field. Clemson will open the regular season on Friday, August 31 against Liberty. The contest will begin at 5:00 p.m. at Riggs Field and will be followed by the Tiger men’s soccer team’s match against South Carolina at 7:30 p.m.