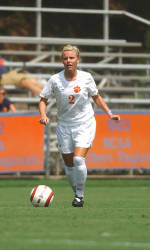 Clemson, SC – One week into the 2007 preseason, the Lady Tiger soccer team is off to a strong start. The team has held two-a-day training sessions nearly every day since reporting to campus on Monday, August 13, and according to senior and All-American goalkeeper Ashley Phillips, already feels like they are in mid-season form.

“Team chemistry has been great this preseason, mainly because we all came in already knowing what to expect of each other,” said Phillips. “It really feels like we are continuing right where we left off after the spring season. Last year we had nine freshmen come in during the fall. This year we have six, but three of them were here playing with us during the spring. That has made a huge difference.”

“It really helped having three of the freshman here during the spring getting to know the team,” added red-shirt junior defender Logan Hull. “At this early point in the season, already knowing what someone else is going to do on the field is a great advantage. We have three new team members to work with now and they have really fit right in.”

Both players cite the importance of one of the team’s primary goals of the preseason, to keep the work ethic at a maximum at every practice.

“There’s a very feisty, hungry attitude among us,” said Phillips. “If you come out and watch practice, you might think that we don’t get along, but we are good at not carrying things off the field or taking things personally.”

Added Hull, “Everyone understands that we are only pushing each other to make each other better. Each one of us is going to hold the other accountable. When we step onto the field, class doesn’t matter. All that matters is that every person out there takes care of her responsibilities.”

Head Coach Todd Bramble was pleased with another factor that has helped the team’s progress during the preseason.

“The players reported in good physical condition which gives us a chance to spend more time with the soccer ball and organizing our team tactics,” he said. “There is a good level of competition within our team right now as our upperclassmen have worked hard to improve their game and the newcomers have quickly stepped up and demonstrated that they belong at this level.”

“All of our training sessions to this point have been very productive, but there is only so much you can do playing against each other. Like our coaching staff, I’m sure the players are eager to play a different opponent to see how we measure up.”