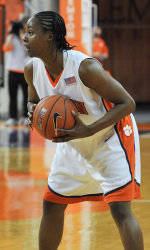 Bryelle Smith had 16 points, including a career-high-tying four threes made in the game, and also added five assists and hit both of her free throws in overtime. Lindsey Mason had a career-high 19 points, seven rebounds, and four blocks to lead Clemson, who won in overtime for the second time this season.

Kirstyn Wright had 16 points, and Hardy had her fourth double-double of the season, notching 13 points and 10 rebounds. She also notched two steals, which tie the Clemson school career record of 327, held by Barbara Kennedy-Dixon. Hardy is now tied for ninth in ACC history in career steals.

For the second consecutive season against Ohio, Hardy saved her best for the final minutes. A season ago, she had 15 points in the final six minutes of the game to lead Clemson to a three-point win against Ohio. This season, she had seven of Clemson’s twelve points in overtime, all on free throws, and pulled down five boards.

Jenny Poff led Ohio with 22 points, six assists, and six rebounds. Clemson had 23 assists on 29 made field goals after entering as the second-best team in the league in assists per game.

Clemson took a 38-30 lead into halftime behind ten first half points form Kirstyn Wright. Hardy and Pauldo were each whistled for two fouls within the first seven minutes of the game, spending the remainder of the half on the bench.

Clemson’s defense clamped down, fueling a 19-10 run. The Tigers held the Bobcats without a field goal from the 10:01 mark until only 2:13 remained in the half. Clemson scored 14 points during the Bobcat drought, a 14-3 run to give Clemson a 33-24 lead on a Smith three from the top of the key.

Clemson was effective rebounding the basketball, registering 27 to Ohio’s 17. April Parker had eight of those caroms, while Christy Brown came up with five in the half. Clemson’s bench accounted for 57 of the 100 total minutes played, 16 of 38 points, and 19 of the 27 rebounds. The Bobcats shot only 35.5% (11-31) in the first frame.

Ohio opened the second half on a 20-9 run, taking advantage of seven Clemson turnovers. Ohio stretched their lead to eight at 55-47 before Clemson responded with a 15-5 run to take a 62-60 lead.

Lele Hardy forced a jump ball on the defensive end, Bryelle Smith drilled a three from the top of the key to take a 73-68 lead with 2:34 remaining. Lindsey Mason knocked in two free throws with 1:48 to go to give the Tigers a 75-70 lead. A Kamille Buckner hoop put the Bobcats down two. Ashley Fowler then hit a three from the right corner to tie it up at 75-75 with 16.9 seconds left.

Lele Hardy then found Mason for a hoop with 6.6 second left. Ohio had no timeouts left, and Fowler made the game-tying layup with 1.7 seconds left.

Smith opened the scoring in overtime with a left-wing three with 2:36 remaining to give Clemson an 80-77 edge. Clemson then used solid defense to hold Ohio to only one field goal in overtime, a desperation three by Carolyn Barnett with 11.6 seconds remaining.

Clemson will return home for three straight games, starting with Wofford on Monday at 7:00 pm. The Tigers will then take on nationally-ranked Georgia on the 28th and Georgetown on the 30th of December.