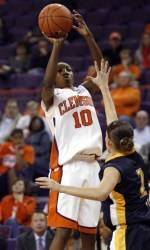 CLEMSON, SC – The Lady Tiger defense held Charleston Southern (1-1) to 26.8% shooting to propel the Tigers (2-0) to a 85-52 win in Littlejohn Coliseum on Sunday. Kirstyn Wright scored a career-high 29 points on 9-13 shooting to go along with seven rebounds and a career-high five steals in the contest.

“It started off a little hectic,” said acting Head Coach Karleen Thompson. “I think that it’s the anxiousness of the players being ready to come out and pounce on someone. We brought our good energy, but I think that towards the middle and at different points, we rushed a lot of things and looked a little sloppy. But we gathered ourselves, got back into it, and did what we had to do.”

Clemson, who led 31-24 at halftime, outscored the Buccaneers, 54-28 after halftime to give Itoro Coleman her second win. Coleman did not attend the game as she recovers from the birth of her third child on Nov. 5.

The Tigers will travel to South Carolina for a 7:00 pm game on Thursday. The matchup will be televised on live Fox Sports Carolinas.

After post play led Clemson to a win on Friday night, it was the guards who stepped up on Sunday. Wright, Bryelle Smith, and Sthefany Thomas combined for 54 points, 13 rebounds, 10 assists and 10 steals. Kelia Shelton also played well, recording seven rebounds, two assists, and two steals in 14 minutes of play.

Wright hit shots from just about everywhere, as she nailed five threes, was 6-6 from the line, and 4-5 from inside the arc. Her previous career-high was 22, which she hit a season ago at Northwestern in the ACC/ Big Ten Challenge.

Jasmine Tate recorded a double-double with 10 points and 10 rebounds. She also added three blocked shots, one of seven Tigers to record at least one. Junior Lindsey Mason was effective in her nine minutes, grabbing eight rebounds to go with her five points. Defensively, Clemson had 12 steals and 10 blocks on the game, while forcing 19 turnovers, and grabbing 37 of 57 defensive rebounding opportunities.

Thomas was strong offensively with 18 points, giving her double-figures for the eighth time in the last nine games, dating back to last season. On Friday night she had 16 points on an identical 7-15 shooting night, but she was able to connect on three from behind the arc on Sunday.

Clemson blew the game open as they outscored the Buccaneers, 34-13 over an eight minute span of the second half, to take a 67-43 lead with eight minutes to play. Clemson hit six threes during the run, including two from Bryelle Smith, two from Thomas, and two from Wright.

“We’re working on that killer instinct and not allowing teams to even think of getting that confidence to come back,” said Thompson. “(Charleston Southern) is a good team. They have great shooters, they play hard, and they work hard. We knew they weren’t going to just lay down.”

The Tigers used a smaller lineup than they did on Friday, as the Buccaneers were a more guard-oriented offense. Clemson’s defense stifled Charleston Southern, holding them to 3-29 (10.3%) shooting from behind the arc, and 26.8% overall.

Fourteen first-half turnovers by Clemson kept the Buccaneers hanging around, but the second-half pace was too quick. Clemson hit 10-19 from behind the arc in the game, including 7-12 in the second half. Over, they hit 50.8% of their shots. Clemson was plus-10 on the glass, outrebounding the Buccaneers, 50-40.