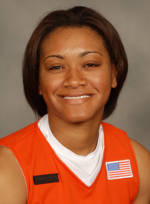 Coming into her senior season in 2007, Tasha Taylor, a Clemson women’s basketball point guard, was on the brink of greatness. She was entering the season as a three-year starter, who ranked 10th in school history with 338 assists and ranked fifth among the Lady Tigers annuals averaging 3.93 assists per game. As an integral part of the Lady Tigers basketball program she was looking forward to a great season.

Then, the unthinkable happened during a preseason workout. Tasha tore her left ACL, forcing her to take a medical redshirt for the 2007-08 basketball season.

“That was the hardest thing for me to go through,” said Taylor. “I thought it would be easy at first, until I had to rehab everyday and watch my teammates play. I feel that it was both a physical and mental strain on me, because it is hard to just sit back and watch. Sitting out a year also took a lot from my game.”

At the 2007-08 post-season banquet, Taylor was awarded the Annie Tribble Leadership Award for providing support, encouragement, and motivation from the bench while she was injured.

“Once I realized I couldn’t help my team on the court in a physical standpoint, I decided to motivate them and support the girls as much as possible. I wanted to be there for my team even though I couldn’t play,” Taylor explains.

After 10 long months without playing, she finally got back to workouts in August 2008 in preparation for the 2008-09 season. “It was hard coming back after sitting out an entire season. I had to get adjusted as the season went on, which was frustrating at times,” states Taylor, who ended the regular season ranking 4th all-time at Clemson with 420 career assists.

She started her basketball career at the age of nine years old with a co-ed recreational league team in Columbus, Georgia. “I was the only girl on a team of boys for three years, but it gave me a toughness and confidence to know that I could play and be better than most of the guys,” joked Taylor.

Taylor became the starting point guard for Carver High School her freshman year, and started throughout her high school career. She became a captain her junior and senior seasons, and used her leadership to help her team reach the 5A Final 4 her senior season. Taylor was also a standout performer for the Columbus Jaguars AAU team. Her AAU exposure led to major Universities recruiting her towards the end of her sophomore year.

“I played against some great competition in high school and AAU, and I felt that all of the training I did then enabled me to be more prepared to play at the collegiate level.”

She developed her hard work ethic from her parents. She had a lot of support and encouragement from them over the years. “My parents always pushed me to achieve all of my goals. I wanted to play basketball at a young age, so my Dad was always practicing basketball with me and encouraging me.”

In Taylor’s senior season, she had to make the decision on what University to attend to play basketball.

“After, weighing out my choices, I decided that Clemson was the place for me. The coaching staff was great, and they made me feel at home here,” states Taylor, who attended the same high school as former Clemson All-ACC football player Brentson Buckner.

“Over the years, there have been some ups and downs, some good games and bad games, but I’ve learned to cherish every moment while I’ve been at Clemson. Clemson has now became a home to me, I’ve found some lifelong friends among my teammates, and my experiences over the past five years will stay with me forever.”

As a freshman, Taylor started 13 of the 27 games as a point guard for the Lady Tigers. She had her best performance that year against Georgia Tech with her season high and her first double-double with 13 points and 10 assists.

“I learned a lot freshman year, coming in playing against the great talent in the ACC only made me work harder in the off-season.”

She solidified a starting position at point guard her sophomore year. Taylor ranked third in the ACC in assists per game with a 5.59 assist per game. She led the team with 53 steals and averaged 7.6 points and 3.8 rebounds a game.

In her junior season, she was switched to the two-guard position, where she became a major offensive threat. Taylor led the team with 12.9 points per game during the conference season. She recorded her career high of 27 points against the #2 ranked North Carolina on January 11, 2007. She also had four steals and pulled down fur rebounds that night.

“The North Carolina game was by far my best moment as a player here at Clemson. I took a lot from that game. It gave me confidence in my game.”

After her career at Clemson, she plans to attend Graduate school. She plans to pursue a career as an assistant coach and recruiting coordinator for a Division I women’s basketball program.

“I love the game of basketball, and I want to bring my experience and knowledge of basketball to a women’s basketball program.” With her endurance and work ethic, Taylor is sure to be a success after her playing days are over.