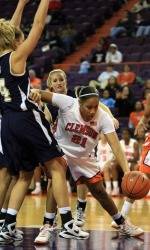 CULLOWHEE, NC – The Lady Tigers scored 10 of their final 12 points from the foul line as they held on to defeat Western Carolina by a 73-64 margin on Wednesday night at the Ramsey Regional Activity Center. Lele Hardy scored 17 of her 19 points in the second half to lead Clemson and move into 19th place on the school’s all-time scoring list.

The victory snapped a four-game losing streak for the Lady Tigers and moved them to 13-11 on the year. The Catamounts fell to 11-11 overall.

“We are just really happy to get a win,” said Clemson Head Coach Cristy McKinney. “A non-conference game on the road in the middle of conference season can be dangerous. It wasn’t pretty but we made the plays when we had to.”

McKinney used her 12th different starting line-up combination on Wednesday with three of the five scoring in double figures in the game. In addition to Hardy’s 19, Tasha Taylor finished with 15 for her season high and April Parker, who transferred from Western Carolina following the 2005-06 season, added 13 against her former team.

Hardy led the Lady Tigers on the boards as well with 12 rebounds while tallying four assists and three steals. Christy Brown also posted double figures on Wednesday, just the second time this season the junior guard has done so, with 10.

“Lele and April had solid games for us and really played well tonight,” McKinney added.

The Catamounts Lauren Powell led all scorers with 20 points in the effort, while Kendra Eaton recorded a double-double with 15 points and 11 rebounds.

The Clemson post players combined for 22 of the teams’ 31 points in the first half and were led by Parker’s 10 on 5-for-7 shooting. The Lady Tiger lead stretched to 12 points after back-to-back baskets by Lindsey Mason made it 25-13. A Parker layup at the 7:09 mark put Clemson on top by 12 again before the Catamounts ended the half on an 11-4 run. Kendra Carroll knocked down a jumper for Western Carolina to cut the Lady Tiger lead to five at 31-26 as the first-half clock ran out.

Neither team put together much of a run in the second half but Clemson slowly widened the margin to 10 after Whitney Hood drained a jumper from the foul line. The Lady Tigers then went up by 13 on layups by Brown and Hardy at 49-36 with 12:46 remaining.

A Brown basket put Clemson top 61-51 at the 3:29 mark and was the last field goal the Lady Tigers made until Hardy scored as time ran out. Western Carolina scored the next four points to come within six points, the closest the Catamounts would make it the rest of the way.

Brown made three free throws while Hardy knocked down five down the stretch. Taylor and Parker each added a foul shot as Clemson was 10-for-14 in the final 1:38.

The Lady Tigers will return to the court on Sunday afternoon as they play host to Wake Forest in a televised contest. The game is slated for a 1:00 pm tip-off.