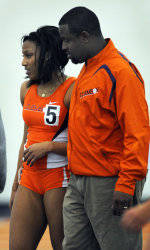 The women’s team tallied 20 points at the meet, tied with Florida State and UTEP for seventh. Oregon (61) won the meet, followed by Tennessee (36) and LSU (35).

“This indoor season has helped build our program into a championship-type program,” said Lawrence Johnson, Clemson’s Director of Track & Field. “We want to become a perennial powerhouse, we want to consistently be among the best in the country. Today was hopefully the start of more to come.”

The official list of All-Americans will be announced after the conclusion of the meet by the U.S. Track & Field and Cross Country Coaches Association. When it is released, the women’s team will have the most indoor All-Americans in one season in school history. In addition, Clemson will have placed at least one men’s athlete on the All-America team for the 14th straight indoor season.

Mamona was national runner-up in the triple jump after setting a school record, breaking the mark of 45’1.75″ set by former NCAA Champion Gisele Oliveira in 2005. Mamona was third heading into the finals, but a monumental leap of 45’5.25″ elevated her past Florida’s Shara Proctor and into the runner-up position. It marks the first All-America performance in Mamona’s brilliant career.

“I’m really proud of her effort,” Johnson said. “She started out hot and consistently got better throughout her progression of jumps. She really focused in on challenging for the win; it was a great competition.”

Clemson actually had two scorers in the triple jump Saturday. April Sinkler overcame a tough day on Friday and placed seventh in the event after matching her personal best at 43’7.25″. She and Mamona became the first duo to be All-Americans for Clemson in the triple jump at the same national meet. It will also be Sinkler’s first-ever All-America honor when the USTFCCCA announces the 2010 indoor award winners.

“April fought hard today,” Johnson said. “She wasn’t feeling like herself yesterday, but she bounced back nicely today after matching her season-best.”

Liane Weber improved one spot from a year ago in the pentathlon, when she was sixth at the NCAA Indoor Championships. She finished fifth Saturday with a total of 4,113 points. The Germany native got her day off to a good start when she clocked a lifetime best 8.50 in the 60m hurdles, sixth-best in the field. However, she gave a few points back after clearing only 5’6″ in the high jump. Weber then hit a mark of 19’3.5″ in the long jump after fouling her first two attempts, followed by a solid time of 2:21.77 in the 800 meters.

The women’s 4x400m relay team finished fifth on Saturday. The all-freshman lineup of Brittany Pringley, Brianna Rollins, Sonni Austin and Jasmine Edgerson routed the opposition in the opening heat with a season-best, school-record time of 3:33.93. In fact, their time was nearly a second better than the previous Clemson record, set by the 2004 team. The fifth-place finish was Clemson’s best at the NCAA Indoor Championships in the event since the 2001 team was third.

“If we had been in the fastest heat this evening, who knows what could have happened,” Johnson said. “Their effort was impressive. It was a gritty performance because they were so far ahead, they had to treat the race almost like a time trial.”

The men’s team received scoring performances from Miller Moss in the heptathlon and Spencer Adams in the 60m hurdles. Both were competing at their first-ever NCAA Indoor Championships.

Moss had a solid 8.15 in the 60m hurdles, the fifth event of the heptathlon. His time was also sixth-best in the field. He struggled in the pole vault, clearing 14’9″ on his third and final attempt. He then fell short at three tries at 15’1″. But, Clemson’s first male multi-event All-American since 2007 rebounded with a personal best in the 1000 meter run. He recorded a time of 2:39.68, fifth-best in the field. Moss finished with a total of 5,638 points and earned a point for the men’s team with his eighth-place finish.

“It was gratifying for Miller to be named All-American,” Johnson said. “He was 11th heading into the 1000 meters, after he was off in the pole vault. But he was out of his mind in the 1000, he laid it all on the line and got the job done.”

Adams also earned a point for the men, placing eighth in the 60 hurdles final. The Charlotte, NC native had a time of 7.90 and was the only freshman to compete in Saturday’s final. Adams is in line to be named Clemson’s first All-American in the hurdles since Roy Cheney was ninth in 2004.