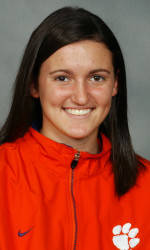 Clark earned her third All-ACC honor in the weight throw on Friday evening. The native of Acworth, GA recorded a toss of 64’8″. Rochelle Kokayko finished seventh to score in that event for the second straight year. She recorded a mark of 57’9.75″, a season-best for the Canada native.

Freshman pole vaulter Beth Jordan scored for the Lady Tigers after finishing seventh at 12’5.5″ as well.

Polly Hardy was impressive in the prelims of the 60m hurdles, as she won the first heat with an NCAA provisional qualifying time of 8.39 seconds. Her time is the third-best in school history in that event. Krystal Barringer followed suit, running a personal best 8.49 to qualify for Saturday’s final as well. Her time is fourth-best in school history. She won the fourth heat on Friday.

In the 60m dash, both Ra’Sheena Parker ran personal bests at 7.62 seconds. Both were just on the outside looking in, missing the finals by .05 seconds. In the 200m, Scott posted a season-best time of 24.98, which was good enough for 15th in a field of 26 sprinters. Ra’Sheena Parker and Michaylin Golladay both ran times of 25.23 in the prelims.

Patricia Mamona scored in the long jump for the Lady Tigers. She had a season-best mark of 19’0.5″ and was fifth overall. She will compete in the triple jump for Clemson on Saturday at 1:30 PM.

The team returns to action on Saturday for the final day of competition. The first women’s event held will be the high jump at 10:30 AM.