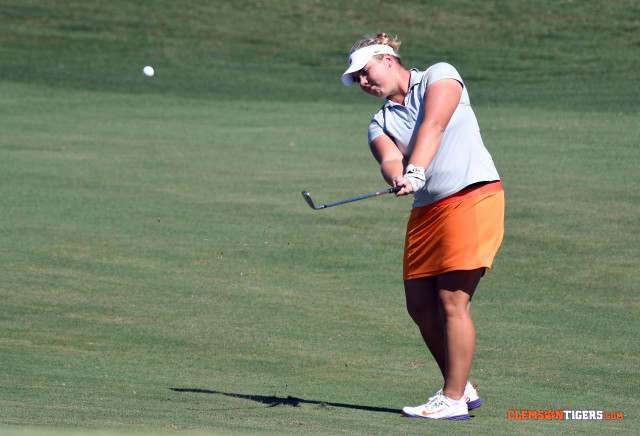 Clemson, S.C.—A veteran Clemson team will compete in the ACC Women’s Golf Championship at the East Course of the Grandover Resort in Greensboro, NC April 21-23. It will be the fifth appearance for the Clemson program in the conference tournament, as this is just the fifth year of the school’s women’s golf program..

All five of the players in the Clemson lineup have played in the ACC Tournament previous. The group has a combined nine ACC Tournaments of experience. This same lineup led Clemson to a program best fifth-place finish out of 12 teams last year when the championship was held at The Reserve at Pawley’s Island. That fifth-place finish led to a fifth-place at the NCAA Regional in Athens, Ga, and a top 20 final ranking at the NCAA National Championship

Clemson has shown improvement at the ACC Tournament each year as the team has finished ninth, eighth, sixth and fifth over the last four years respectively. Clemson is ranked 30th by Golfweek and 31st by Golfstat enter the ACC Tournament. The ACC is having a strong season in women’s golf as there are nine teams ranked among the top 35 teams in the nation according to both computer rankings.

Clemson won the Houston-Dickson at The Woodlands, Texas and also has two other top three finishes. Clemson has a 72-60-1 record against the field in its nine previous tournaments

Clemson will have the same lineup this year as it had in 2017. Leading the way is junior All-ACC golfer Alice Hewson. The native of the United Kingdom has a 72.21 stroke average, a figure that is on pace to break her own single season record of 72.39 set last year. This year Hewson has four top 10 finishes, six rounds in the 60s and 10 rounds under par. She is Clemson’s career leader in stroke average at 72.69 and has a pair of top 20 finishes at the ACC Tournament in her career.

Sydney Legacy is in her third year as a starter at the ACC Tournament. She has a pair of top 25 finishes in her two previous appearances. The senior from Lexington, SC is having her best season with a 72.93 stroke average and three top 10 finishes. Legacy has had four consecutive top 13 finishes, including three top 10s in her last four outings. She finished third at the Bryan National with a 219 score, 13 shots better than any other Clemson golfer.

Ana Paula Valdes, a sophomore from Mexico, was Clemson’s top player last year at the ACC Tournament with an even par 216. She had three consecutive rounds of even par 72 to finish in a tie for eighth place, the best individual finish by a Clemson women’s golfer at the ACC Tournament. Valdes is third on the Clemson team in stroke average this year with a 73.63 stroke average.

Kennedy Swann is fourth on the Clemson team in stroke average at 75.05, but the sophomore from Austin, Texas is second on the team in rounds in the 60s with five. Swann finished second at the Houston Dickson with a 69 at the rain shortened event. She was a big reason Clemson got the team win.

Marisa Messana wlll become the first Clemson women’s golfer to play in four ACC Tournaments when she begins play on Saturday. The Clemson graduate, who was recently honored in Greensboro for her academic success, became the first Clemson women’s golfer with a pair of top 25 finishes at the ACC Tournament when she finished 21st and 19th in her first two tournaments, both at Sedgefield Country Club in 2015 and 2016. She finished 39th last year. She has a solid 74.4 stroke average for her nine career rounds at the conference level with just one round over he 74 mark.

– Best individual Round at ACC Championship: 70, Alice Hewson 1st round, 2017