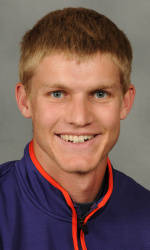 BLACKSBURG, VA – Clemson women’s track & field leads the team standings at the ACC Indoor Championships heading into the final day. Boosted by Brittney Waller’s victory in the 20-pound weight throw, the Tigers have 54 points compared to 36 for second-place North Carolina. Clemson is seeking its second consecutive ACC indoor championship, which would be a first in school history. The men’s team is in seventh place with 19 points heading into Saturday, trailing leader Virginia Tech. Miller Moss won the heptathlon to highlight the day’s events for the Tiger men’s team.

“I’m very proud of both teams,” said Lawrence Johnson, Clemson’s Director of Track & Field. “It’s comforting on the women’s side to know that we have several qualified for the finals. We have some breathing room and it was good to put up 54 points, but now we need to take care of business, go out there and execute.”

Moss became Clemson’s first winner of the heptathlon at the ACC Championships since Ryan Koontz claimed the crown in 2007. Moss was consistent throughout the competition, closing with a point value of 5,881. His personal best was 5,903 earlier this season. Moss had an outstanding hurdles time (8.04), followed by a personal best 15’9″ clearance in the pole vault. He cruised in the 1000m, the final event, to win the championship. Claudio Delli Carpini was sixth in the standings for Clemson before a no-height in the pole vault forced a withdrawal.

“Miller was consistent and focused on what he needed to do to win the championship,” Johnson said. “I’m proud of the guy; no one competes like him.”

Waller captured the women’s weight throw championship in dramatic fashion. Clemson’s first winner in the event since Danielle Curry had a personal best (60’3.25″) and finished fifth.

“Brittney really competed her butt off,” Johnson said. “It was good to see her doing her thing. She battled against a tough league for throwers. She really took our words about competing to heart.”

Three females qualified for the 60m dash final. Misha Morris also advanced after running a personal best 7.44 in the preliminary round. Kendrick (23.91) and Edgerson (24.09) also qualified for the 200 final, as did transfer Marlena Wesh (23.91).

Clemson advanced four contestants into Saturday’s final for the 60m hurdles. Brianna Rollins, who had been nursing an injury, sizzled to an automatic NCAA qualifying time 8.13, best among the field Friday. Her time was also a personal best and Clemson record for the event. The other qualifiers for Saturday’s final were Bridgette Owens (8.36), Monique Gracia (8.37) and Edgerson (8.40). Gracia’s time was a personal best and put her in a tie for sixth on the all-time performance list at Clemson.

“For Brianna to achieve an automatic mark, it was special,” Johnson said. “Now, she knows she will be going to nationals. It’s especially gratifying for her considering all the injuries she has had this season.”

In the men’s 60m hurdles, Moss earned a spot in the final alongside teammate Spencer Adams. A native of Charlotte, NC, Adams clocked a time of 7.95. Moss’ time in the open hurdles was 8.06.

Wesh qualified for the women’s 400m final. The former University of Oklahoma product recorded a season-best time in the event, clocking a time of 54.19 to place second overall in the preliminary round. Wesh’s time is seventh-best in Clemson history. Qualifying for the men’s final in the quarter mile was sophomore Jordan Rispress, who had a time of 48.40 to win the second heat.

Chris Slate and Nathan Hendershot moved on in the men’s 800 meters. Slate turned in a time of 1:51.40 to win the third heat. Hendershot, a freshman from Pendleton, IN, produced a personal collegiate best with a time of 1:51.80 in the final heat and edged teammate Jasen Turnbull for the final transfer spot.

Defending women’s 5K champion Kim Ruck earned another All-ACC finish on Friday. The Greer, SC native placed third. She jumped out to the lead and stayed there for the first several minutes until Wake Forest’s Anna Nosenko took over for good. Ruck had a time of 16:40.78. Elyse Borisko won the opening section of the 5K with a lifetime best 17:33.32, one of the top 10 times in Clemson history. She was 15th overall.

In other field event action Friday, two-time defending champion April Sinkler fell just short in her bid to earn a third straight ACC crown in the long jump. Sinkler hit a season-best jump and NCAA auto mark of 21’1.5″, but took second to Florida State’s Kim Williams. Jasmine Brunson set a personal best, as the sophomore out of Bermuda was fourth with a jump of 20’5.75″. Her mark is good enough for sixth on Clemson’s all-time list.

Sinkler garnered another All-ACC accolade, the eighth of her brilliant career (including outdoors), with another runner-up finish in the high jump. A native of Stafford, VA, Sinkler cleared 5’10.5″ to match her season-best for the event.

“April almost cleared her last bar in the high jump,” Johnson said. “She’s starting to come around to where she wants to be. She’s not out there competing against slouches in her events, so we’re happy she was able to get us a bunch of points.”

Lauren Terstappen was sixth in the other vertical jumping event, the pole vault. The freshman cleared a height of 12’11.5″ in her first trip to the ACC Championships.

Josh Fowler was fifth in the men’s long jump final. The December graduate posted a top leap of 24’5.5″, a season-best for the Inman, SC native.

The action resumes on Saturday. Clemson’s first events, the women’s triple jump and shot put, will be held at 11:00 AM. The first track final for Clemson will be the women’s 60 hurdles at 12:40 PM.