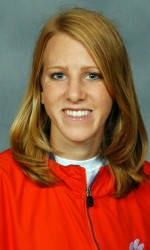 Boiling Springs, NC – The Clemson women’s cross country team competed at the Gardner-Webb Duels on Friday afternoon. For the third straight race, newcomer Laura Laughlin led Clemson’s individual scorers. The Lady Tigers were fifth in the team race, as Kennesaw State took home the title with 50 points. Two of Clemson’s top runners, Patrice McMillan, did not race due to rest.

Laughlin had a solid time of 16:18 over the course which measured slightly over 4000 meters. She has been the team’s top finisher in the last three meets, as she was 19th at both the Lou Onesty Invitational and Great American Cross Country Festival. Her sixth-place finish marked her first career top-10 effort as a Lady Tiger.

The Lady Tigers return to action next weekend to take part in the Furman Invitational in Greenville, SC.