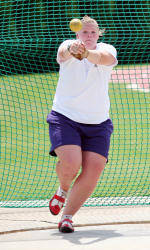 Clemson Women Fifth After Day One of ACC Outdoor Championships

Della Clark earned her second All-ACC honor in the hammer throw and fifth overall (three indoor honors in the weight throw). The senior from Acworth, GA placed third in the event with a season-best, regional-qualifying throw of 183’5″. She also finished third in the hammer last season. Rochelle Kokayko also scored for the Lady Tigers, finishing eighth at 176’3″ on her first throw of the afternoon.

Linda Buchholz earned her first All-ACC honor in a Clemson uniform. The freshman from Bad Segeberg, Germany placed third in the javelin throw. She had a throw of 143’0″, which also gives her another regional-qualifying mark in the event. She is the first Lady Tiger to earn All-ACC honors in the javelin since Kammie Blount achieved the feat in 2000.

Liane Weber ranks fifth in the heptathlon after four of the seven events were held Thursday. She has a total of 3,069 points heading into the final three events. Weber got off to a strong start after posting a time of 14.63 in the 100m high hurdles. She was third-best in the opening event. She then tied for fourth in the high jump with a 5’5″ clearance. She bounced back after a tough outing in the shot put to run 25.90 in the 200m dash. It topped her previous best this season.

Anni Korhonen and Anastasia Wilson earned half a point each in the high jump on Thursday. Both student-athletes cleared 5’5″ to tie for eighth place. Wilson was competing in her first-ever ACC outdoor meet. Linda Buchholz (5’3″) and Katie Farnan (5’1″) also competed for the Lady Tigers, but did not score.

The second day of action gets underway Friday with the completion of the heptathlon at 11:00 AM. The first individual event for Clemson will be the 1500m prelims at 3:00 PM.