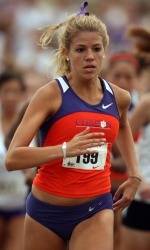 CLEMSON, SC – For the first time in many years, Clemson has a nationally-ranked cross country team. The Tiger women were ranked No. 30 in this week’s coaches’ poll, the U.S. Track & Field and Cross Country Coaches Association announced Tuesday. It is the first time Clemson has been nationally ranked in either men’s or women’s cross country since November of 1993, when the Tiger women finished 16th at the NCAA Championships.

“We’re excited to be nationally ranked this week and recognized by our fellow coaches,” said Lawrence Johnson, Clemson’s Director of Cross Country and Track & Field. “We continue to make strides with our distance program, and this is just another example of that. Coach (Brad) Herbster has done a fantastic job with our distance groups, and we look forward to even more success this season and in the future.”

Clemson is one of five schools from the Atlantic Coast Conference ranked in the nation’s top 30 this week. The women’s team is also up to No. 3 in the latest Southeast Region ranking, moving ahead of last week’s top-ranked team, Duke. Clemson trails only North Carolina and

The Tigers have competed in three meets so far this fall, with their top finish a first-place effort on Sept. 16 at the Clemson Invitational. At that meet, the Tigers knocked off a top-10 ranked Florida State team. Last weekend, Clemson finished seventh at the Notre Dame Invitational against a strong field. The Tigers were able to knock off then No. 22 ranked Princeton, among others, at the meet last Friday.

Alyssa Kulik has been the team’s top finisher each of the last two meets. The senior from Simpsonville, SC was fourth at the Clemson Invitational, before finishing 23rd at Notre Dame last weekend. Kim Ruck, a Greer native, was fifth at the Clemson Invitational and 50th at Notre Dame. Kate Borowicz, who hails from Greenville, was ninth at the home meet, but fourth-best on the team. Last time out, the Georgia Tech transfer was the team’s No. 2 runner with a 30th-place finish.

Natalie Anthony is the only student-athlete to score for the Tigers in every meet so far this season. She was seventh at the Clemson Invitational with a lifetime best 6K time on Sept. 16. She also led the Tigers’ partial squad in the Eye Opener in Spartanburg, SC to begin the 2011 campaign.

Clemson returns to action on Saturday, Oct. 15 at the Wisconsin Invitational.