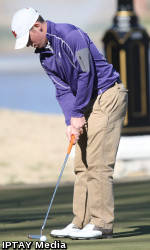 CLEMSON, SC – Crawford Reeves made a three-and-a-half foot birdie putt on the final hole to give Clemson a one-shot victory at the 15th annual USC-Aiken Cleveland Golf Intercollegiate in Aiken, SC. Clemson won the 18-team event with an 854 team score on the par 70 Palmetto Country Club Course.

The victory was the first of the year for Larry Penley’s team, but the 62nd career win for the Clemson coach who is in his 29th year leading the program. He is second in tournament wins in ACC history behind Wake Forest legend Jesse Haddock.

It was Clemson’s first victory by a single stroke since the Tigers won the 2003 ACC Tournament. It marks the fourth straight comeback victory for the Tigers. Clemson trailed after two rounds at the 2009 US Collegiate and each of the last two years at the Furman Invitational.

Clemson’s score of 854 was one better than ACC rival Virginia. South Carolina, who was tied for the lead with Virginia with 18 holes to play, finished third with an 863 score. Liberty was fourth at 867 and East Carolina was fifth at 868. Furman was sixth at 873 and defending NCAA Champion Augusta State finished seventh at 874.

Reeves finished second in the tournament individually with a 209 score, the best 54-hole score of his career. He had rounds of 69-70-70 and now has a 71.00 stroke average for six rounds this spring. He sat out the fall with a back injury. He finished second to Ben Kohles of Virginia by just one shot.

Reeves, who was in the last group of the day, was two back to Kohles in the individual race and the Tigers were one back as a team playing the last hole. However, no one knew how the team race stood entering the last hole. Reeves hit a perfect drive to within yards of the green on the uphill 315-yard par four, while Kohles drive was shorter.

Reeves hit his approach to 3.5 feet, while Kohles was still 30 feet away after his approach. Kohles missed his birdie putt and Reeves made his to give Clemson the one-shot victory. No one knew how big Reeves’s putt was until the scores were confirmed by the official scorers after the round.

McCuen Elmore, who’s opening round 75 was the non-counter for the Tigers, had a strong even par 70 on Tuesday, including a birdie on the last hole. Thomas Bradshaw had a 71 on Tuesday, while freshman Billy Kennerly birdied two of the last three holes to shoot 72. Corbin Mills had a 73 in the final round and was Clemson’s non-counter in the final round, but his opening rounds of 74 and 71 were both counters.

For the second straight tournament, all five Clemson golfers finished in the top 25 of the individual race. In fact, all five finished in the top 21 at this event. Reeves was second, his best career finish, while Kennerly was seventh for the second straight tournament with a 215 total. Elmore was 11th with a 216 score, while Bradshaw was 14th with a 217 score. Mills was a shot back at 218, good enough for 21st.

Clemson’s performance was much improved over last year when the Tigers shot an 868 score and finished sixth at the same tournament on the same course.

Clemson’s next tournament will be the Furman Invitational March 16-18 in Greenville, SC. Clemson is the two time defending champion of that tournament.