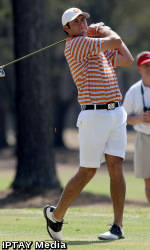 GREENVILLE, SC – Corbin Mills fired a seven under par 65 and teammates Crawford Reeves, McCuen Elmore and Thomas Bradshaw added rounds of 69 to lead Clemson to a 15-stroke victory at the 43rd annual Furman Invitational at the Furman University Course in Greenville, SC.

It was the second consecutive tournament victory for Larry Penley’s team, who won the USC-Aiken Cleveland Classic two weeks ago by one shot over Virginia. Sunday’s victory was a 15-shot win over Virginia Tech, the largest margin of victory for the Clemson program since a 31-shot win at the Top Cub in Tokyo, Japan in September of 2002. This is also the first time Clemson has won back to back tournaments in eight years.

Clemson finished with a team score of 857, 27 under par on the par 72 Furman Course. The 857 score established a tournament record and the 27 under par score is the seventh best in Clemson history and the best since the 2002-03 academic year. Clemson shot a 272 team score on Sunday, the same 16 under par score the Tigers had in winning at Furman last year.

Mills, who was playing in his final tournament for Clemson before he competes in the 2012 Masters, had seven birdies, an eagle and two bogeys on Sunday. The 65 tied for his best score as a Tiger, but his seven under par score was his career best vs. par. He played the par fours and the par fives at four under par apiece. He got his round off to a good start with a birdie on the first hole and an eagle on the second hole.

“It was big that I birdied the first hole today,” said Mills, who qualified for the Masters by winning the 2011 US Public Links Championship last July. “Some might think the eagle was big, and it was, but I eagled the second hole on Saturday. I bogeyed the first hole yesterday. To me the birdie on one was bigger.”

Mills eagled the second hole for the second straight day by hitting his second shot within five feet of the cup. On Sunday he had 205 yards to the hole and he hit his five iron within four feet and then made the putt for eagle. Mills round also included a 35-foot birdie putt on the par three 16th hole and a miraculous up and down from 130 yards on the 17th hole after he drove his ball into the woods.

Overall, Penley was pleased with his team’s performance as it heads to the Insperity Augusta State Invitational at the end of the month. “We were solid the last two days, we put it all together,” said Penley, who won the 63rd tournament of his Clemson career on Sunday. “The first day we just didn’t putt well, but the last two days we made some putts. This will give us great confidence as we go one.

“We came into this tournament as the favorite and I was interested to see how we would play as the favorite. The last two days we played like we were capable. We showed some depth.” All five Clemson golfers finished in the top 25 and all five had at least one round in the 60s during the tournament. The Tigers threw out a 70 each of the last two rounds.

Mills finished in third place with his 208 score, his second best finish of the year. He will not compete again for the Tigers until the ACC Tournament April 20-22. He will miss the Augusta State Invitational and the Woodlands Invitational while he plays in the Masters.

Crawford Reeves and Thomas Bradshaw finished tied for fourth with a 209 score. It tied for Reeves best tournament of the year and was Bradshaw’s top event of the year. Reeves now has a 70.6 stroke average for the year in nine rounds. Bradshaw, who finished third at the Furman Invitational last year, had rounds of 71-69-69. Reeves had four birdies and a bogey on Sunday, while Bradshaw had five birdies and two bogeys.

Freshman Billy Kennerly continued his consistent play with a 213 score for his 54 holes, good enough for 11th in the field of 126 golfers. Kennerly shot a 70 on Sunday and had five birdies and three bogeys.

McCuen Elmore shot a 69 on Sunday thanks to five birdies and two bogeys. He finished 21st overall with an even par 216 score.