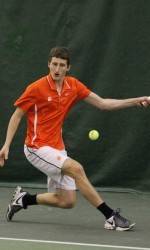 CLEMSON, SC-The Clemson men’s tennis team will play host to The Citadel and Georgia State on Sunday at the Hoke Sloan Tennis Center.

Clemson is now 6-0 overall this season and is ranked 64th nationally. Clemson is off to its best start since the 2007 season. That season, the Tigers won the first nine matches.

This will be the 48th meeting between Clemson and The Citadel on the tennis courts. Clemson leads the overall series 32-14-1. The series started on April 15, 1930, and the two teams played to a 3-3 tie.

This will be the sixth meeting between the Tigers and Georgia State. Clemson leads the series 4-1. The series began in 1942.