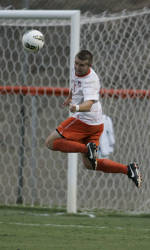 CLEMSON, SC – The Clemson men’s soccer team will play host to 19th-ranked Charlotte on Tuesday night at 7:00 p.m. at Historic Riggs Field. The game between the Tigers and 49ers will be broadcast live on ClemsonTigers.com via TigerCast.

Clemson will enter the match with a 1-3-0 overall this season. The Tigers are led in scoring by Austin Savage with three goals for six points. Amadou Dia has two goals for four points. Cody Mizell is in goal for the Tigers and has 17 saves this season.

Charlotte has a 5-1 record overall this season. The 49ers are ranked 19th according to the lastest NSCAA poll. Jennings Rex has three goals for six points this season to lead Charlotte. The 49ers defeated 10th-ranked Virginia 2-1 at Charlottesville, VA on September 16.

This will be the 16th meeting between Clemson and Charlotte on the soccer field. The Tigers lead the series 9-3-3.