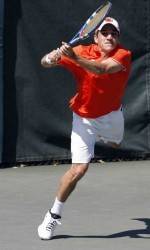 CLEMSON, SC–Clemson will play host to the number-one ranked Virginia Cavaliers on Sunday at 1:00 p.m. at the Hoke Sloan Tennis Center.

This will be the last home match for the Tigers this season. Next week the Tigers compete in the Atlantic Coast Conference men’s tennis tournament in Cary, NC.

Clemson is 17-8 overall and 3-7 in the ACC. Clemson is ranked 44th nationally according to the latest ITA poll.

Virginia will enter the match with a 31-1 record overall and a 10-0 mark in the ACC. The Cavaliers, ranked number one in the country, have already claimed the regular season ACC title and have won a league record 57 consecutive wins against ACC competition.

This will be the last home match for three Tiger seniors Carlos Alvarez, Gera Boryachinskiy and Rok Bizjak.