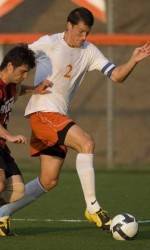 CLEMSON, SC – The Clemson Men’s Soccer team will play host to South Carolina on Friday, September 4 at 7:30 p.m. at Historic Riggs Field. The game will be broadcast live on www.clemsontigers.com via TigerCast.

This will be the 37th meeting between Clemson and South Carolina in men’s soccer. The Tigers lead the overall series 22-13-1. Clemson is 12-7 against the Gamecocks in matches played at Tigertown. Clemson is 10-3-1 in the last 14 matches against South Carolina since the 1996 season.

Clemson’s Joseph Bendik is one of the nation’s top goalkeepers. In 2008, he finished the season with 92 saves and a 1.42 goals allowed average. He led the ACC with over five saves per game. He has 196 career saves, seventh on the Clemson career list. He finished 26th in the nation in saves per game in 2008.

Want to Go? Historic Riggs Field in located in the heart of the Clemson University Campus behind Clemson’s famed landmark, Tillman Hall and the Hortzendorff YMCA Building. Because of the First Friday Parade starting before the soccer match, parts of Highway 93 that runs by Historic Riggs Field will be closed. It is suggested that fans use Perimeter Road to gain access to the parking lots for Historic Riggs Field.

From Anderson and Greenville: After turning on Perimeter Road from Highway 76 go to third traffic light and make a right at the Avenue of Champions (Littlejohn Coliseum will be on the left). Go two blocks, and make a left on Williamson Road. Make a right at Heisman Drive in front of Fike Field House. Parking will be available at the next right.

From the Seneca Area: After turning off US 123, cross the lake and turn on Perimeter Road from Highway 93, at the first light go to the next light and make a left. (Littlejohn Coliseum will be on the left) Turn on the Avenue of Champions. Go two blocks, and make a left on Williamson Road. Make a right at Heisman Drive in front of Fike Field House. Parking will be available at the next right.