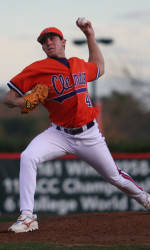 Clemson vs. Virginia Tech Clemson (20-9, 5-4 ACC), ranked as high as #16 in the nation, will travel to Blacksburg, VA to take on Virginia Tech (16-14, 4-8 ACC) this weekend in a three-game series at English Field. Game times are 7:00 PM (Friday), 2:00 PM (Saturday), and 1:00 PM (Sunday). The first two games will be shown live via webcast at ACCSelect.com. All three games will be broadcast live on the radio by Clemson Tiger Sports Network. Live stats will also be available at ClemsonTigers.com for all three games.

The Starting Pitchers In game-one, Virginia Tech will start senior righthander Greg Fryman (2-4, 6.80 ERA) on the mound. The Gibsonia, PA native has made seven starts for a total of 43.2 innings pitched. He has allowed 64 hits (.346 opponents’ batting average) and 18 walks with 18 strikeouts.

The Tigers will counter with junior lefthander Daniel Moskos (2-2, 2.49 ERA) on Friday. The Alta Loma, CA native has made 17 relief appearances for a total of 21.2 innings pitched. He has allowed 15 hits (.211 opponents’ batting average) and 12 walks with 28 strikeouts. In three seasons as a Tiger, he has made 71 relief appearances. He will be making his first start as a Tiger on Friday.

In game-two, the Hokies will send out senior lefthander Andrew Wells (2-2, 5.49 ERA) on the mound. The Alexandria, VA native has made seven starts for a total of 39.1 innings pitched. He has yielded 49 hits (.297 opponents’ batting average) and 16 walks with 21 strikeouts.

The Tigers will counter with junior righty David Kopp (3-2, 3.32 ERA) on Saturday. The Margate, FL native has made eight starts for a total of 43.1 innings pitched. He has allowed 43 hits (.262 opponents’ batting average) and 15 walks with 33 strikeouts.

In game-three, Virginia Tech will start senior righty Adam Redd (2-2, 2.89 ERA) on the mound. The Dumfries, VA native has made three starts and seven relief appearances for a total of 28.0 innings pitched. He has allowed 30 hits (.294 opponents’ batting average) and nine walks with 23 strikeouts.

Clemson will counter with sophomore lefty Ryan Hinson (2-1, 2.04 ERA) on Sunday. The Rock Hill, SC native has made seven starts for a total of 39.2 innings pitched. He has allowed 36 hits (.243 opponents’ batting average) and 12 walks with 33 strikeouts.

The Hokies Virginia Tech, led by first-year Head Coach Pete Hughes, enters the series with a 16-14 overall record and 4-8 ACC mark after defeating Virginia Military 13-6 on Wednesday and being swept by Virginia at home last weekend. The Hokies, who are 7-6 at home, have played eight of their last nine games at home.

The pitching staff has a 5.94 ERA and .282 opponents’ batting average. The Hokie pitchers have combined to strike out 225 against 139 walks. Righthander Rhett Ballard has made 19 relief appearances and has 49 strikeouts in 37.2 innings pitched. The team is fielding at a .962 clip as well.

The Tigers Clemson enters the series at Virginia Tech with a 20-9 overall record and 5-4 mark in the ACC after falling defeating Georgia twice in a midweek, home-and-home series by scores of 4-2 and 11-10. The Tigers, who are 2-4 on the road this season, also bring a #16 national ranking into the game.

The team is hitting .290 with a .371 on-base percentage. Brad Chalk is hitting a team-best .408 with a .520 on-base percentage. Doug Hogan is hitting .365 with four homers and 15 RBIs. Taylor Harbin leads the squad with 25 RBIs and 11 doubles. First-baseman Andy D’Alessio, who suffered a pulled groin in the second inning against Miami (FL) on Sunday, is listed as questionable for the series. He did not play in either game against Georgia.

Utility player Graham Stoneburner is the lone Tiger from the state of Virginia. However, the freshman is red-shirting in 2007 after suffering a torn ACL in January.

Tigers Take Two Close Games From Georgia Clemson won both games of a midweek, home-and-home series against Georgia on April 3,4. The Tigers outscored the Bulldogs 15-12 despite being outhit .307 to .279. Addison Johnson was 5-for-7 with three RBIs in the two games.

Brad Chalk and Johnson also had two hits apiece. The Tigers did not commit an error, and Clemson only allowed six Bulldog hits and no walks in the contest.

Johnson’s two-out, walkoff double in the ninth inning lifted Clemson to an 11-10 win over Georgia at Doug Kingsmore Stadium on April 4. The Tigers trailed by a run in the ninth inning before Stephen Clyne, the eighth pitcher of the night for Clemson, earned the win after retiring the only batter he faced.