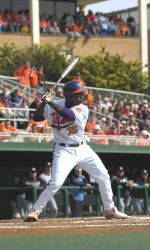 Clemson vs. South Carolina Clemson (25-10), ranked as high as #13 in the nation, will travel to Columbia to take on #4 South Carolina (29-8) on Wednesday at Sarge Frye Field in the third of four scheduled matchups between the two rivals during the regular season. First pitch for Wednesday’s game is scheduled for 7:06 PM. The game will be televised live by CSS. The game will also be broadcast live on the radio by Clemson Tiger Sports Network. Live stats will be available on Clemson’s athletic website at ClemsonTigers.com as well. The two teams will play again on April 25 at Doug Kingsmore Stadium.

The Series Clemson and South Carolina have met 277 times on the diamond, with Clemson holding a 162-113-2 lead in the series dating back to the 1899 season. South Carolina is Clemson’s most-played rival in history.

Earlier this season in March, the Gamecocks won both games of a weekend series by scores of 12-0 at Doug Kingsmore Stadium and 3-2 in Columbia.

The Starting Pitchers South Carolina will start sophomore righty Mike Cisco (2-2, 5.44 ERA) on the mound Wednesday. The Mount Pleasant, SC native has made eight starts and one relief appearance for a total of 46.1 innings pitched. He has allowed 53 hits (.290 opponents’ batting average) and eight walks with 35 strikeouts.

The Tigers have yet to determine their starting pitcher.

The Gamecocks South Carolina, led by 11th-year Head Coach Ray Tanner, enters Wednesday’s game against Clemson with a 29-8 overall record and 9-6 SEC mark after winning two of three games against Auburn at home this past weekend and defeating Wofford 8-0 on Tuesday. The Gamecocks, who are 17-4 at home, are ranked as high as #4 in the country.

South Carolina has outscored its opponents by a combined score of 318-135 this season. Six of its eight losses have been by one run. Offensively, the team is hitting .318 with a .408 on-base percentage, 63 home runs, and 182 walks. The team has swiped 39 bases in 45 attempts and has 29 sacrifice bunts. The Gamecocks are 27-0 when they total at least as many hits as their opponents and 2-8 when they get outhit. One of those two wins was against Clemson on March 4 when the Tigers outhit the Gamecocks 8-7.

The pitching staff has a 3.01 ERA and .224 opponents’ batting average. The team has allowed just 131 walks with 360 strikeouts. Junior righty Wynn Pelzer has a 2.28 ERA and 32 strikeouts in 23.2 innings pitched out of the bullpen.

The Gamecocks have one of the nation’s best defenses, as they have committed just 32 errors in 37 games, good for a .977 fielding percentage.

The Tigers Clemson enters the game at South Carolina with a 25-10 overall record and 10-5 ACC mark after winning two of three games at Wake Forest over the weekend. The Tigers, who are 7-5 on the road this season, also bring a #13 national ranking into Wednesday’s game.

Worth Noting * Clemson is 16-0 when its opponents commit two or more errors.

Polls Clemson stayed at the #14 spot in the Baseball America poll and jumped to #13 in the Collegiate Baseball poll on Monday after going 2-1 in three games last week. Clemson also stayed at #15 in the Sports Weekly poll.

Strikeout-to-Walk Ratio Among Tigers’ Best Clemson has a solid 3.35 ERA through 35 games this season. But the Tigers have been especially good at striking out the opposition without giving them “free passes.” The staff has combined for 300 strikeouts against only 97 walks, good for a 3.09 strikeout-to-walk ratio. That is the second-best mark in school history, trailing only the 3.16 figure that the 1996 staff had, which includes future Major Leaguers Kris Benson, Billy Koch, Ken Vining, and Matt White. The 2007 staff’s 8.67 strikeouts-per-nine-innings-pitched mark is also the best figure since the 1996 staff’s mark of 9.69.

Tigers Take Two of Three at Wake Forest Clemson, ranked #14 in the nation, won two of three games at Wake Forest from April 13-15, as the Tigers won the first and last games of the series. Clemson did not commit an error in the series, while Tiger pitchers combined for 30 strikeouts against only four walks. Brad Chalk was 5-for-6, Wilson Boyd was 5-for-9, and Ben Paulsen was 5-for-10 to lead the Tigers, who outhit Wake Forest .291 to .277 in the series.

In game-one, Taylor Harbin added two hits and three RBIs. Addison Johnson went 2-for-3 with a triple and two runs scored as well. The Tigers’ three-run sixth inning proved to be the difference. Clemson did not commit an error and held Wake Forest to 1-for-13 with runners on base.

In game-two, Brett Linnenkohl’s walkoff single in the ninth inning gave Wake Forest a 6-5 win over Clemson at Hooks Stadium on April 14. The loss snapped the Tigers’ 17-game winning streak in the series. Tyler Smith walked to lead off the ninth, went to second on a balk, and scored two batters later on Linnenkohl’s single over the head of Johnson in left field. After the Demon Deacons scored three runs in the fifth inning after the first two batters of frame were retired, Clemson scored four runs in the sixth on two-run doubles by both Doug Hogan and Mitchell. But Evan Ocheltree’s solo homer in the bottom of the sixth tied the score. Mitchell and Chalk led Clemson with two hits apiece, while Linnenkohl had three of Wake Forest’s 10 hits.

In game-three, Clemson escaped with a 5-4 win at Wake Forest on April 15. The Demon Deacons scored two runs in the ninth and had the potential tying run on second base with one out before the game was eventually called due to heavy rain. The two teams waited 90 minutes until the game was finally called, and there was also a 69-minute weather delay at the end of the fourth inning. Andy D’Alessio went 3-for-4 with two doubles and three RBIs as well.